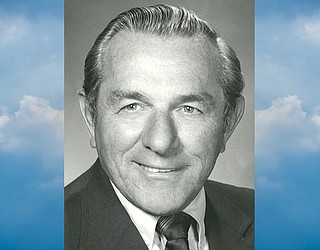 Peter John Yurkovich, 92, died at his home in Phoenix on Monday, February 5, 2018 after a brief illness.

A lifelong Arizona resident, Pete Yurkovich was born in Jerome and graduated from Jerome High School before enlisting in the U.S. Navy during World War II. After returning from the South Pacific he attended Arizona State College at Flagstaff where he graduated with a degree in business administration.


Moving to Phoenix in 1954 he joined Foster and Kleiser Outdoor Advertising which later became Eller Outdoor Advertising Company. He was named President of Eller Outdoor in 1968 before assuming the additional role of president of the Outdoor Division of Combined Communications Corporation in 1970. Pete continued to work for Combined Communications until it merged with Gannett Company, Inc. in 1979. He remained with Gannett Outdoor as president before retiring as a senior consultant in 1992.

Preceded in death by his parents, Petar and Ika Yurkovich and his brother, Dan Yurkovich, he is survived by his daughter, Cindy Yurkovich of San Diego, and two grandchildren, Lucien Tully and Lyric Tully. Other family members include nephews, Dan Yurkovich and John Yurkovich and nieces, Dona Lloyd and Julie Forrest, all of California.

Pete was an accomplished golfer. He enjoyed his many golfing adventures in Scotland, Ireland, Europe and Japan. He often played in the Phoenix Open and participated in many business-related golf tournaments around the U.S. He was a longtime member of Phoenix Country Club and served on its Board of Directors.

In addition to golf Pete enjoyed reading, traveling to Croatia and relating stories of growing up in Jerome to his many friends and family. He was the last great historian of the Yurkovich family.