Film Festival presents ‘Deconstructing: The Birth of the Beatles’ Dec. 16 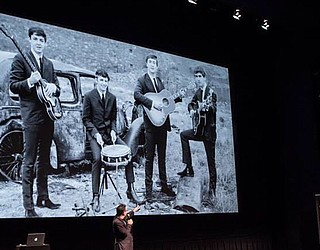 “Deconstructing The Beatles: The Birth of The Beatles” will show in Sedona on Monday, Dec. 16 at 7 p.m. at the festival’s Mary D. Fisher Theatre.

Sedona International Film Festival will be the official host of “Deconstructing the Beatles”, joining hundreds of theatres around the country for this special series. “Deconstructing The Beatles: The Birth of The Beatles” will show in Sedona on Monday, Dec. 16 at 7 p.m. at the festival’s Mary D. Fisher Theatre.

In the late 1950s, John Lennon, Paul McCartney, George Harrison, and Richard Starkey were just four Liverpudlian teenagers who decided to play music. With no formal training and no ability to read or write music, they tried to emulate their American rock heroes. Within a few years, they would change music history (and the world) forever.

Historian and composer Scott Freiman traces the birth of the Beatles from their days as the Quarrymen to their first visit to EMI Studios and the recording of “Love Me Do.”

Freiman combines his love of The Beatles with his experience as a composer, producer and engineer to deliver unique educational lectures about the creative process of The Beatles. He moves past the personalities of the four Beatles to uncover the reasons why their music continues to be loved by millions.

His multimedia presentations transport his audiences into Abbey Road Studio with anecdotes about The Beatles’ recording sessions, allowing fans to experience the evolution of The Beatles’ groundbreaking albums and songs.

Freiman’s lectures have entertained audiences of musicians and non-musicians alike, from pre-teenagers to octogenarians.

“Deconstructing The Beatles: The Birth of the Beatles” will be shown at the Mary D. Fisher Theatre on Monday, Dec. 16 at 7 p.m. Tickets are $12 general admission, or $9 for Film Festival members.

Tickets are available in advance at the Sedona International Film Festival office or by calling 928-282-1177 or online at www.SedonaFilmFestival.org.

Both the theatre and film festival office are located at 2030 W. Hwy. 89A, in West Sedona.