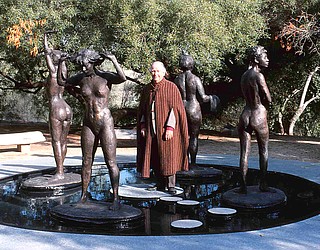 After enduring and thriving through nine tumultuous decades of Art in America, internationally acclaimed figurative sculptor John Henry Waddell, gave a gentle gesture and a smile, then passed from this world Nov. 27, 2019.

After enduring and thriving through nine tumultuous decades of Art in America, internationally acclaimed figurative sculptor John Henry Waddell, gave a gentle gesture and a smile, then passed from this world Nov. 27, 2019. He was 98 and throughout his singular life Waddell used his art to honor the victims of senseless violence, uplift those around him capturing some of the most significant political and social moments of the past century, including World War II, the Birmingham bombings and the Sept. 11 attacks.

In 1963, he reached a turning point in his art and life-philosophy in response to the tragic 16th Street Church bombing in Birmingham, Alabama, when a bomb exploded before Sunday morning services. A church with a predominantly African-American congregation, it served as a gathering place for the community and also civil rights leaders.

On Aug. 28, Rev. Martin Luther King had delivered his iconic “I Have a Dream Speech” and two weeks later a bomb exploded before Sunday morning services. Four young girls were killed and many other people injured. All four of the men linked to the bombing belonged to the Ku Klux Klan. Outrage over the incident followed and the violence between protesters and police drew national attention to the hard-fought, often-dangerous struggle for civil rights.

Waddell was so moved by this that he immediately went into his studio and began moving things around - making way for something. Feeling something had to be done, to be said. As he was a sculptor, it would be through his art. He and his models would retaliate with peace.

Over the next 15 months, 19 different women from the surrounding community came to pose for Waddell and his sculptural eulogy to the four little black girls - the work that would come to be titled, ”That Which Might Have Been, Birmingham, 1963.”

These four poignant sculptures, facing North, South, East and West, represent the girls had they grown to womanhood. They are on permanent display at the Unitarian Church in Phoenix and the George Washington Carver Museum and Cultural Center in Phoenix.

“From a world torn asunder by artificial and meaningless barriers, where differences create misunderstanding and fear, we look to a future of harmony and peace, where differences quicken interest, reveal beauty, and create a desire to understand,” notes John Waddell.

John passed in the presence of his family at the Waddell Studio and Sculpture Garden in Arizona’s Verde Valley where he and his partner in life and art of 70 years, Ruth Holland Waddell, have lived, worked and experienced the changing landscapes of art in America through the decades.

His daughter, Amy Waddell, notes “He chose to portray people turning toward each other, not away from each other. And I think he felt that, kind of, the secret to resolution, whether it was in personal life or in his work ... was that if we turn toward one another, that there was always hope, that we would find the answers.”

Waddell was born in Des Moines, Iowa on Valentine’s Day in 1921. Serving as Private First Class in the army during WWII, one of John’s wartime contributions was as a muralist of hope. On the GI Bill he returned to the School of the Art Institute in Chicago, Illinois.

He earned two Masters Degrees and later an Honorary Doctorate from the National College of Education, Chicago. It was at the Art Institute that he met his life partner and muse Ruth. They were married in a small ceremony with friends and fellow students Leon Golub and Nancy Spiro as witnesses. They returned the favor when Nancy and Leon were married.

They spent the odyssey of next seven decades together serving as inspiration to each other, their family and other artists while they built a unique life as working artists. They celebrated their 70th wedding anniversary in March.

Waddell designed a program for students with Downs Syndrome and varied mental and physical challenges and incorporated Art and Dance into the learning process.

As it had for other colleagues in art and architecture such as Frank Lloyd Wright, Max Ernst, Dorothea Tanning and Paolo Soleri, the ever-changing landscapes under the vast Arizona skies resonated deeply with the Waddells and inspired both of them to paint and sculpt.

Away from changing modes of the art world, Waddell entered what would be the most prolific period of his life thus far. He has sculpted over 150 life size, and over life size bronze figurative sculptures, many small figures, as well as paintings and drawings.

“John Waddell depicted people honestly, their individuality and essence become beauty, their emotion relatable and sometimes tender, each piece is expressing life. One feels like his sculpture could easily start walking or dancing with joy,” says Linda Goldenstein “His timeless work moves one deeply and will touch generations to come.”

In 1970, John retired from university teaching and built a formidable studio in the Verde Valley where apprentices came from around the world to learn from him and where he himself created more life-size figures than his inspiration, Rodin, had in his lifetime. His work was placed along the pathways of the Sedona Cultural Park inspiring all who passed. His “Dance,” on permanent display at Phoenix’s Herberger theatre helped establish the growing city’s commitment to public art. Described as “particularly joyous” by the Phoenix New Times, “Dance” depicts dancers in the height of their artistic tension. Defined by the motion and interactions of their bodies, this piece effortlessly displays a sense of balance and vivacious community.

His philosophies included The Beauty of Individual Differences and he said of his work “I see the beauty in the individual.”

He and Ruth were engaged in the community throughout his life, last summer, in partnership with Goldenstein Gallery, they hosted a series of four art tours over the summer at their ranch.

Nearing 100 years of life in art, John Henry Waddell “Man of Bronze” leaves a vast contribution of art and philosophy for future generations to explore. His ongoing influence in the Verde Valley and the world at large remains. To find out more about John Waddell please go to www.artbywaddell.com or www.GoldnsteinArt.com