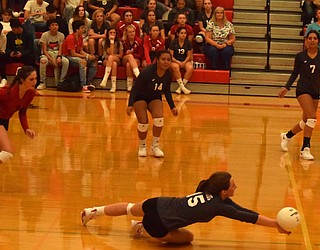 Mingus senior Jenna Mahon dives to try and get a dig during the Marauders’ 3-1 loss to Lee Williams on Tuesday night at home. VVN/James Kelley

“It’s a tough loss, we needed that win going into the rest of our season,” Mingus head coach Chelsea Chavez said. “We needed that and the girls couldn’t pull though.”

The Volunteers took the first set 25-21 after mounting a late rally. However, Mingus Union won the second set 25-15. Lee Williams struck back to win the third 25-19 and then the fourth 25-15.

“Lee Williams is a team that’s scrappy and is very good at coming back,” Chavez said. “Last year we took it to five sets both times we played them and the girls knew but didn’t respond. They knew that they were going to come back, they came back with excitement in that second set, that’s why we won it, but then Lee Williams responded in that third set and we kinda shut down a little bit.”

The Vols were coming off a 3-1 home loss to No. 5 Bradshaw Mountain.

Mingus Union had won three matches in a row and four of their last six. The Marauders swept Glendale, then beat Mohave 3-2 on the road and Prescott 3-2 at home.

Chavez said the Marauders had been playing really well heading into LW match.

“It was hard to watch the girls play not at their level (Tuesday) night,” Chavez said.

Chavez said the Marauders’ libero and middles and have been playing well of late.

“Both of my middles are really improving really well,” Chavez said. “Our libero, she’s getting a lot better at staying disciplined, she’s still young, she still has a lot to learn but she’s getting better. My middles and my libero are getting pretty good.”

The first AIA rankings were released this week and the Marauders were where Chavez expected them to be. With a ranking of 22nd, Mingus Union is just in the play-in tournament, which features the teams ranked ninth to 24th.

On Monday the Marauders travel to No. 2 Flagstaff. Mingus Union’s next home match is Oct. 17 at 6 p.m. against No. 33 Mohave.