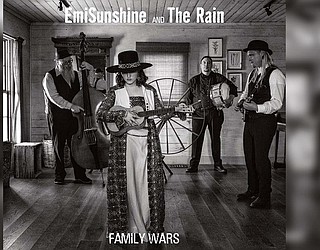 The legendary Merle Haggard’s memory lives on, thanks to his sons, Ben and Noel, whose national tour will bring them to Arizona in October.

The Haggard Brothers will headline at the Sedona Performing Arts Center Sunday, Oct. 13, 6 p.m., performing many of their dad’s classic songs in his inimitable outlaw-country style.

“I watched him sing on stage, absorbed the little things he was doing, the tricks with his voice, how he handled the crowd,” Ben said. “It was like going back to school. Things I didn’t realize I picked up from the eight years I spent on the road with him started to come into play.”

Ben toured as lead guitarist with his father’s band for several years and was a regular on many of his records. His television appearances include a 2014 performance at The Grammys with Willie Nelson, Kris Kristofferson and Blake Shelton.

Opening for The Haggard Brothers will be Tennessee-based EmiSunshine and The Rain, who will preview songs from their upcoming Americana album, “Family Wars,” produced by legendary Nashville hitmaker Tony Brown. The album, which will be released on Oct. 19, is comprised of 10 original songs and one bonus track, addressing such issues as domestic violence, mass murder, political corruption, love and freedom in America.

“The album is about working through different types of conflicts,” said lead singer EmimSunshine. “I’m just voicing my opinion about what I see going on in the world, but hopefully in a way that won’t offend. I’m looking at problems and trying to make something beautiful out of them.”

Emi, who is now 15, has attracted national attention since she was nine years old, with appearances on “The Today Show,” NBC’s “Little Big Shots,” “Pickler & Ben,” and elsewhere, including 14 performances at the Grand Ole Opry in Nashville, as well as performances at major festivals like CMA Fest and MerleFest.

EmiSunshine’s music has been praised by such luminaries as Loretta Lynn, Emmylou Harris, Tim McGraw, Ricky Skaggs, Marty Stuart and The Grateful Dead. Though her roots are in Bluegrass and Country, her musical styles also include Blues and Gospel. Critics have compared her to a young Janis Joplin and Dolly Parton. Rolling Stone named her among “10 new country artists you need to know.”

In 2017, EmiSunshine made her motion picture debut in the Grammy-nominated Elvis Presley documentary film “The King” alongside Rosanne Cash, Emmylou Harris, Ashton Kutcher, Alec Baldwin and other stars. Emi wrote two songs for the movie, which she performed while riding in the backseat of Elvis’ Rolls Royce. She also performed at the movie’s premiere at the Cannes International Film Festival. Her YouTube videos have garnered over 16 million views.

Information about EmiSunshine is available at www.TheEmiSunshine.com

Information about The Haggard Brothers is available at www.BenHaggardMusic.com.

Tickets are $25-$35 and can be reserved by visiting https://theemisunshine.com/#TourSection.