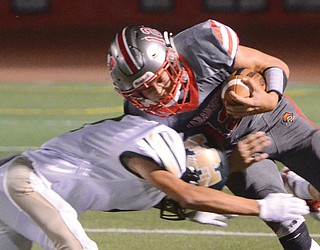 Mingus junior Andrew Meyer runs the ball during the Marauders’ 29-28 loss to Mohave on Friday night at home. VVN/Vyto Starinskas 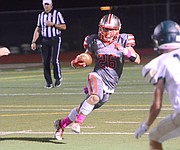 In the last minutes of the game, the Thunderbirds (3-3, 2-0 Grand Canyon) marched down the field in an improbable drive that included a defensive pass interference on a rare deep throw and capped by a 25-yard touchdown pass. In the entire game the Thunderbirds only attempted six passes, completing three, but was compelled to with the clock ticking down.

Then trailing by a point, Mohave went for a two-point conversion where the snap bounced off the turf but the quarterback recovered to throw a prayer into the back of the end zone that was caught but a returning Thunderbird receiver.

Following the touchdown the game clock dropped from 1:13 to :55 according to the Mingus Union coaches. The Marauders appealed to correct the clock but in ensuing argument head coach Robert Ortiz was thrown out of the game.

“What they said was that, our explanation was that the clock did not start on the two-point conversion, when it was a dead ball the clock should not have been running at all,” said Mingus assistant coach Erick Quesada. “So they said after the touchdown it was at 55 seconds, which is up for serious debate.”

Starting with a Marauder defensive back throwing his helmet down in frustration following the two-point conversion, Mingus Union racked up three 15-yard penalties and so Mohave kicked the ball off from the MUHS 15-yard line. They kicked it through the back of the end zone and the Marauders went four and out on their last drive.

“It’s just a culmination of different things,” Quesada said. “But we have to be smarter and just realize the situation. I mean we’ve been shooting ourselves in the foot as of late and it’s come back to bite us.”

Quesada said the kids battling to the last minute impressed him.

“In the past six games we had the tendency to come out very slow and very lethargic but we finally had that tenacity from the very get go and I think having the crowd behind us and having it being Homecoming really played a part in our success early on,” Quesada said.

For the Homecoming game, the Mingus Union side was more packed than normal, there was a band and the student section was louder than previous games.

“The crowd was fantastic, that’s something that just you have to build off of and you have to realized that that’s a game changer, especially in the game of football where it’s all passion, it’s all heart,” Quesada said. “I mean having the student section like that it’s massive, it’s huge, so it’s great to have the community behind us, especially after kind of a rough start to the season, it’s big time for us.”

In their previous game on Sept. 27 the Marauders lost 42-27 at Lee Williams to clinch their first regular season losing record since 2004 when they went 4-7. The Marauders finished 5-6 in 2017 and 2011 but in those years they finished the regular season 5-5 and lost in the first round of the state tournament.