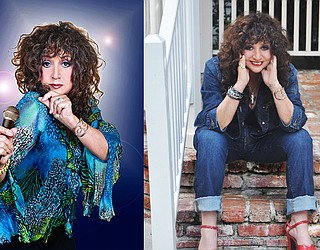 The legendary Maria Muldaur appears in concert at the Old Town Center for the Arts in ‘Old Town’ Cottonwood, Arizona on Thursday, Oct, 17 at 7 p.m.

Maria Muldaur is best known worldwide for her 1974 mega-hit “Midnight at the Oasis,” which received several Grammy nominations, and enshrined her forever in the hearts of Baby Boomers everywhere; but despite her considerable pop music success, her 55-plus year career could best be described as a long and adventurous odyssey through the various forms of American Roots Music. During the Folk Revival of the early ‘60s, she began exploring and singing early Blues, Bluegrass and Appalachian “Old Timey” Music, beginning her recording career in 1963 with the Even Dozen Jug Band and shortly thereafter, joining the very popular Jim Kweskin Jug Band, touring and recording with them throughout the ‘60s.

In the 46 years since “Midnight at the Oasis,” Maria has toured extensively worldwide and has recorded 41 solo albums covering all kinds of American Roots Music, including Gospel, R&B, Jazz and Big Band (not to mention several award-winning children’s albums). She has now settled comfortably into her favorite idiom, the Blues. Often joining forces with some of the top names in the business, Maria has recorded and produced on-average an album per year, several of which have been nominated for Grammys and other awards.

In 2018, Maria released her 41st album “DON’T YOU FEEL MY LEG ~ The Naughty Bawdy Blues of Blue Lu Barker”, which was nominated for a Grammy in the Best Traditional Blues category. Recorded in New Orleans with an amazing cast of A-List NOLA musicians, this album finds Maria at her finest, and is true to the spirit and soul of New Orleans and Barker’s funny, coy, and risqué material. This marks her 6th Grammy Nomination! Maria says “it’s an honor to be nominated. I’m so grateful that this music is being recognized & enjoyed again after all these years!’

In Sept. 2019, The Americana Music Association awarded Maria ‘The Lifetime Achievement Americana Trailblazer Award’ for her lifelong work of covering the depth and breadth of American Roots music and for being one of the pioneers who laid the groundwork for what we’ve come to call ‘Americana Music’.

Don’t miss Muldaur’s attention-grabbing, widely accessible and soul-satisfying music at the Old Town Center for the Arts. Tickets are $30 advance and $35 at the door, $40 priority seating in the first 3 rows. Purchasing tickets prior to day of show is strongly advised, as this event is expected to sell out. Old Town Center for the Arts Is located at 5th Street & Main in Old Town Cottonwood. Tickets are available online at showtix4u.com. Tickets are also available in Cottonwood at: Desert Dancer, and Mt. Hope Natural Foods, and in Sedona at The Literate Lizard Bookstore.  For upcoming events, visit www.oldtowncenter.org. For further information, contact Elena Bullard at 928-634-0940.