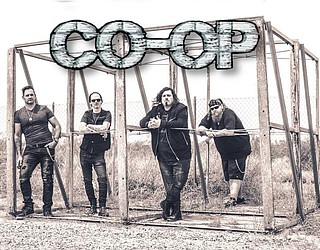 No strangers to performance, CO-OP brings a big, powerful sound to their show.

Forming in 2014, CO-OP began gathering a small following in the local Phoenix scene. Within a few years, having shared the stage with rock legends like Motley Crue, The Hollywood Vampires and Alice Cooper, CO-OP is expanding their influence beyond Arizona and even outside the United States.

Formed in 2017, the band consists of Fabian Luna on guitar/vocals, Sean Deaton Scott on bass and Tim Munsil on drums. Show starts at 9 p.m. and there is a $5 cover charge for this can’t-miss show.

Friday, September 13, DJ Johnny K will once again fill up the dance floor with his amazing skills and creative music mix.

For several years and counting, Johnny K has delighted guests at the venue with his performances while playing crowd favorites of the last five decades and a variety of musical genres including old school R & B, hip hop/rap, top 40 and everything in between.

Music starts at 9 pm and goes until 2 am when lights come on and the bar closes. This is a 21+ event with no cover charge.

Main Stage has a series of nightly events the remaining nights of the week as well. Mondays feature Latin dance classes with Dana De Luz at 6:30 pm then karaoke with hostess Christa Cave at 8 pm.

Tuesdays are swing dance class with Dana De Luz at 6:30 pm and then karaoke with host, Sean Bouchard at 8 pm.

Wednesdays are “This Ain’t Your Grandma’s Bingo” with hostesses, Penny Smith and Rebecca Riffel.

Main Stage is located at 1 S Main St in Cottonwood and is open Monday through Saturday 11 am to close and closed on Sundays. All events are free to the public unless otherwise noted.