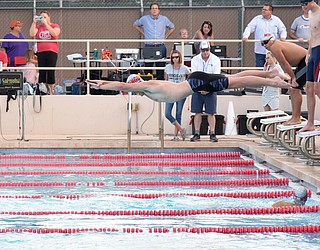 Mingus senior Andrew Peterson dives into the pool during the 400 freestyle relay on Thursday at Cottonwood Aquatics Center against Northland Prep. VVN/James Kelley

Mingus Union swimming and diving features a record-breaking 48 swimmers, and in its first meet, its veterans threatened their top times from last year.

The Marauders opened the season with a pair of wins over Northland Prep on Thursday at home.

“It was fantastic,” Mingus head coach Gretchen Wesbrock said. “We obviously had a victory and so many new swimmers just having the opportunity to compete was just a highlight for me (Thursday) for sure.”

“For some of them they put times on the board (Thursday) that were closest to their fastest times at the end of the season last year, so that’s really exciting (laughs) when you see that,” Wesbrock said.

Last year the Marauder boys finished eighth at the state meet and the girls 12th.

Wesbrock said the flow of new swimmers was “like, never-ending” and that she was impressed by how many were totally new and just decided to take up a difficult sport.

“We’re bigger than we’ve ever been, we have 48 swimmers who are actually showing up,” Wesbrock said. “We’ve been over 30 before but never this big and there’s just such a spirit of team camaraderie; it’s really special what we’re seeing this year with this group.”

Among the four state qualifier meets is the Friday Night Lights at Chandler, which starts at 6 p.m. on Oct. 18.

“We haven’t gone to that meet before, we’ve gone to a night meet at ASU, it’s been fun but this one we’ve heard a lot of really good reviews,” Wesbrock said. “They do it a little different, where you’re competing against swimmers in your same school class, so freshmen against freshmen, sophomores against sophomores, juniors against juniors, so just a little different flair and I think it’ll kinda spice it up for the swimmers this year.”

The Marauders’ home meets are at Cottonwood Aquatic Center on 100 Brian Mickelsen Parkway.

“The community response is beautiful and my swimmers were saying they really want to get more people out to their meets and I said ‘you guys need to pay attention to those stands because they’re full every meet,’” Wesbrock said. “Because we’re off-site, sometimes at school they don’t get the same recognition as other sports because it’s not like kids can just walk out of the school building and see there’s a game going on but they deserve all that recognition and more. And not just because of how hard they work in the pool, but they’re awesome students in the classroom and you’ll hear a lot of teachers say ‘you just have the nicest group of student-athletes, they’re polite, they’re courteous, they’re kind’ and that says a lot.”

The Marauders host Basis School Flagstaff and Paradise Honors at 4 p.m. on Thursday.