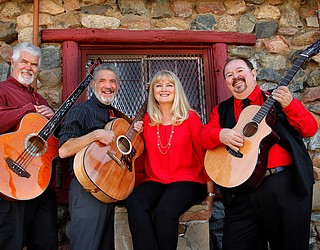 The Old Town Center for the Arts is pleased to announce a preview of some of the upcoming performances for the Fall 2019 Season.

OTCA has the distinction of completing 11 previous seasons, hosting over 530 events drawing performing artists from every continent except Antarctica. Besides adding to the cultural and entertainment scene of Old Town, OTCA has also produced and hosted many community events devoted to education and sustainability.

“Hard to believe this will be our 12th season,” Co-Director William Eaton remarked. “It’s always a thrill to see audiences transported through theater, live music, and comedy. Along with the performers, our volunteers and technical staff work hard to make every event a memorable and enjoyable experience.”

Here are a few highlights of the Fall events scheduled for the 2019/2020 season:

The 6th Annual Celebrate the River Concert on Friday, September 27th, 7 pm, will begin the Old Town Center for the Arts 12th Season. This annual event kicks off Verde River Day, and gathers musicians, artists and river advocates to honor and bring attention to the Verde River & Oak Creek Water Basins which supply our most important resource – water.

This year’s concert will be a multi-media sensorial experience. “The idea was sparked when I heard Keith Johnson create with percussion instruments the sounds of birds, insects and other wildlife that inhabit the Amazon River rain forest,” Co-Director William Eaton remarked. “It was mesmerizing, and we’re really excited about bringing something new to OTCA.”

The musicians, along with lighting director James Ball and image artist Elena Bullard will take the audience on a journey from the world’s largest river system, the Amazon, to our local Verde River. Experience sounds, lighting, visuals, and original songs, to transport you in, on, and along the world’s rivers.

The concert is dedicated to our most important natural resource – water.

The Celebrate the River Concert is co-sponsored by: the Old Town Center for the Arts, whose mission includes presenting and supporting events that promote local sustainable initiatives, and by the ‘Friends of the Verde River’ who works collaboratively to restore habitat, sustain flows and promote community stewardship to support a healthy Verde River system.

The legendary Maria Muldaur appears in concert at the Old Town Center for the Arts in ‘Old Town’ Cottonwood, Arizona on Thursday, October 17th at 7 p.m.

Backed by her Red Hot Bluesiana Band, Muldaur will showcase the worldwide release of her newest CD “Don’t You Feel My Leg – The Naughty Bawdy Blues of Blue Barker.” Maria and the Band will also feature many of her chart topping hits including, “Midnight at the Oasis.”

Maria is best known worldwide for her ’74 mega hit “Midnight at the Oasis,” which received several Grammy nominations and enshrined her forever in the hearts of Baby Boomers everywhere. Despite her considerable Pop Music success, Maria’s enduring career is best described as a long adventurous odyssey through the various forms of American Roots Music.

During the folk revival of the early ‘60’s, she began exploring and singing early Blues, Bluegrass, Appalachian music, and began recording in 1963 with the Even Dozen Jug Band and shortly thereafter, joining the popular Jim Kweskin Jug Band, touring and recording with them throughout the 1960’s.

Most recently, Ms.Muldaur has been nominated as Best Female Blues Artist for the 2019 Blues Blast Music Awards. Maria will be stopping in Cottonwood during a long tour throughout the United States, with stops in most major cities, notably The Lincoln Center Midsummer’s Nights Swing Series in NYC, and the Annual Americana Music Honors & Awards Program at the Grand Ol’ Opry’s Ryman Auditorium in Nashville.

Come to OTCA and take a trip back in time. Enjoy the timeless music of Peter Paul and Mary with MacDougal Street West, on Saturday, October 19th at 7 pm.

The group’s repertoire included songs written by Yarrow and Stookey, early songs by Bob Dylan as well as covers of other folk musicians. Their music is revived and lives on in the Arizona based group MacDougal Street West.

The new flowering of a vibrant musical tradition was rooted in Greenwich Village of the early 1960’s. Now legendary folk singers and songwriters of that era could first be heard nightly in the cafes stretching along fabled MacDougal Street.

Bresnan Unplugged in the Doghouse, Saturday,

Dan Bresnan returns to Old Town Center for the Arts in Cottonwood, AZ after well-received sold-out performances from the Bresnan Unplugged Trio. On Saturday, November 2, 2019 at 7 p.m., this all-star ensemble will feature Dan Bresnan (acoustic archtop guitar/vocals) along with Allen Ames (violin/acoustic guitar) Felix Sainz, Jr. (acoustic bass), and Dave Len Scott (Trumpet). This concert is dedicated to the Verde Valley Humane Society, and a portion of proceeds from the evening will be donated to support the Verde Valley Humane Society located in Cottonwood.

Highlighted in this performance the trio will engage the audience in nostalgic music from The Great American Songbook. Some of the composers represented will be Cole Porter, Johnny Mercer, and Irving Berlin, as well as originals from leader, Dan Bresnan.

The Bresnan Unplugged ensemble is excited to return to this theatre and will present an evening of sophisticated, heartfelt, fun music in a performance venue known for its warmth and historic charm.

The band is comprised of five amazing musicians aged 19 to 22, and are one of the youngest bands ever to win the Telluride Festival contest.

Mark your calendars, get your tickets, and join us for these and other upcoming events at Old Town Center for the Arts. For ticket information and to learn more about the concerts, classes at Studio B and community events at OTCA please visit www.oldtowncenter.org.

Tickets are available online at www.showtix4u.com, in Cottonwood at Desert Dancer and Mount Hope Natural Foods; and in Sedona at The Literate Lizard Bookstore.