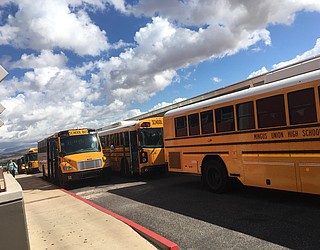 COTTONWOOD – Mingus Union High School dismissed its students at 9:30 a.m. due to a power outage less than a mile from the school.

Mingus Union Superintendent Mike Westcott said that the school worked a staggered dismissal that took about 15 minutes. Not only was power out at the school, but the school’s alarms were out, as was water service.

Though electricity was back before 10 a.m., the school continued dismissal protocols, Westcott said.

“We were already two-thirds dismissed when the power came back on,” Westcott said. “It looks like it’s fully back on right now.”

The power outage was due to an electrical pole that fell in the back end of a property in the 700 block of E. 4th Ave., less than one mile from the high school.

Power went out at about 8:40 a.m., according to Caleb Burkee, who lives at the home with his wife and children. Burkee said that he heard the pole hit the ground, “then I looked out and saw the lines down.”

The power pole had been leaning, Burkee said, for about 12 years.

“The top of the pole had been almost horizontal,” Burkee said.

When power went out at Mingus Union, Westcott first told teachers to keep their students in first period, to not send them to their next class.

“It was about 45 minutes by the time we started to [dismiss for the day],” Westcott said.

Though the temporary electrical outage also affected Dr. Daniel Bright and Mountain View Preparatory, the two Cottonwood-Oak Creek schools did not close for the day.

Cottonwood-Oak Creek Superintendent Steve King said he was in the process of telling district leadership of an impending closure when power was restored.

Had C-OC schools closed, children would have been served sack lunches if needed, King said in an email to the Verde Independent.