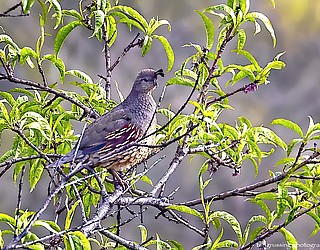 Not all days are productive and there are days when I just shoot for the sake of shooting something … this hen dove is one such example. She is perched in the peach tree about 50 or 60 feet off the back deck where One and I spend some time each day. Even with the 400mm lens I know that I am not going to be getting any frame filling creature, but it is fun to use the camera and shoot something. I seldom look at any of these shots and more frequently than not I simply delete all the images I have taken on days like this. For some reason I did save this shot … I like the feel and mood it generates … a happy, light and airy sensation.

Another beautiful day spent almost entirely working on images for the greeting cards that I hope to have up on the website next week. I got the issues resolved with the shopping cart and will have that generated over the next few days and upload it. I’m also going to be producing a line of coffee mugs and a few other things. Mostly they will involve the use of One as my model for the composites I plan to put on them.

A noteworthy event will taking place in the next couple of weeks and that is that magnetic and true north will be syncing at Greenwich, England. The prime meridian also known as zero longitude runs through Greenwich. This is the first time this syncing has occurred in about 360 years. Up until now magnetic north has been west of the zero meridian and by 2040 they expect it to be east of the meridian. True north is the north south line you see on a map or globe and it seldom varies more than a few inches which is due to the wobble in the poles location caused by tidal forces. Earth is basically a gigantic dynamo and generates a very powerful magnetic field as the molten core of the planet rotates at high speed beneath our feet … the field is very uneven due to the effects of the solar wind, the interior dynamics of earth and the uneven nature of the crust.

Magnetic north has been moving more than 30 miles west per year and is accelerating … between 1900 and 1980 it did not move all that much but it has been on a roll since then. If you rely on navigation in the air or on the water or over land you know that there is the magnetic declination which is the number of degrees east or west of true north your magnetic compass shows you … So as the magnetic pole continues west, the declination will be zero at Greenwich and then gradually become east whereas it has been west.

The magnetic field is not the same as gravity; the magnetic field is what protects us from the solar wind and other radiation from space and without it, the solar wind and other forces could strip the atmosphere from our planet … the strength of the field has declined about 10% over the last century … but it always changes. Gravity is different and is the attraction between different bodies … earth and moon and sun and all planets … a real harmony and gravitation is mass dependent … the more mass, the more gravitational attraction.

Some scientists think that this acceleration could be the beginning of a pole reversal, where north will become south and south become north. It has been nearly 800,000 years since we have had a pole reversal whereas typically it has flipped every 400,000 years. The pole reversal process takes about 10,000 years so no great concern for us … ten thousand years ago our species wasn’t exactly a news item on the planet and for sure humans didn’t think they could alter the course of earths ever changing evolution.

Fun stuff and worth reading and studying … not that we can do anything about it, but it is nice to understand, even partially, the dynamics of earth. We are temporary visitors here so enjoy each day to the fullest … what a gift to be alive!

Have a beautiful day and smile … we’re alive!

Everything is still, and the soft night air is cool.

… the moon is passing in and out of the clouds, making

a shadow-checkered day of the night, and breaking the sky with shafts of gold.

All silent, the universe is doing its work --- beautiful, mysterious, religious.