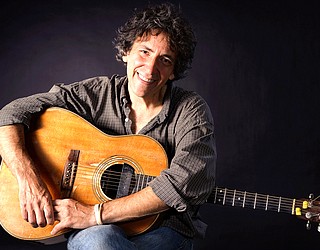 Performer, composer and Windham Hill favorite Sean Harkness brings his guitar mastery back to Arizona for an evening of powerful, evocative music. Enjoy the signature sound of this remarkable artist, and the stories he tells through song. Harkness is a first-call guitarist who compliments an exhaustive client list of artists, instrumentalists, Broadway productions, and corporations nationally and internationally.

Anthony Mazzella returns to OTCA after well-received sold out performances. On Saturday, March 10, Mazzella is joined for one night only, by Fingerstyle Guitarist Michael Gulezian.

Gulezian is one of the most highly acclaimed solo acoustic instrumental guitarists of our time. He is a phenomenal technical guitarist with the rare ability to transcend his own virtuosity, creating music that touches and moves people at the deepest level.

Mazzella is one of the most virtuosic and passionate guitar players in the world today. Anthony’s original guitar music is composed with a fusion of world influences consisting of acoustic and electric finger-style, classical, flamenco, jazz, funk, R&B, Celtic, ambient, rock, medieval & near-eastern styles.

The concert will feature Celtic and new world music for an entertaining and enchanting evening to celebrate St. Patrick’s Day and the earliest traditions of winter turning to spring.

Arvel Bird, named by the prestigious Cowboy and Indian Magazine, as one of the top four favorite Native American Musicians, is a violinist, flutist and composer who brings to life the dramatic connection between Native American and Celtic traditions, stirring up scenes that echo from North American memory. For the past 13 years Bird and his wife and musical partner Kimberly Kelley have toured across the U.S. and internationally.

This year’s celebration of the blues will feature a reunion of the legendary Los Angeles blues band, Blues Dawg, a later version of which has performed throughout Arizona for over a decade, under the guidance of local bluesman, Joe Neri. Also performing at the Old Town Blues Fest will be the Phoenix-based Mojo Rats. Mojo Rats, fronted by singer/guitarist Bob Vincent, blew the roof off of the Old Town Center for the Arts two years ago and are returning by popular demand. They are the No. 1 biker band in the Valley of the Sun and know how to rock the blues with their musicianship and stage presence, as well as their dedication to the blues masters of the past.

Ken Koshio is a world class Japanese Taiko drummer. Taiko is a Japanese style of percussion, which combines music, movement and spirit. Koshio pushes the boundaries of Taiko through various collaborations, creating a totally authentic and unique style of music and Taiko performance art.

The theme of the concert is “Celebration of the Earth” where art, culture and music intertwine to celebrate the diversity of cultures across the planet. Since ancient times, Taiko rhythms have been dedicated to setting the ‘heartbeat’ in motion, expressing the melodies and pulse of mother earth.

The SunDog Twins (aka, Leon Littlebird and Will Clipman) first met as floating Artists-in Residence on a two-week, 256-mile rafting expedition through the Grand Canyon in 2012. Their simpatico was immediate: not only did the Rocky Mountain troubadour and the Sonoran Desert drummer become fast friends, they also discovered an innate gift for composing and improvising together.

Their post-Canyon concert at Coconino Center for the Arts in Flagstaff cemented the duo’s performing chops, and was followed by successful shows throughout Arizona and Colorado, culminating in the recording of their new album Shadow Chant.

This very special musical event not only celebrates the birthday of Bob Dylan (who will be 77 years young) but also brings together some of the best musicians in the Verde Valley area to perform and honor the music of this legendary, iconic and most influential man, who has dominated the American music scene for well over half a century.

The show will feature individual performances by Gary Simpkins, Tim Young, Mike McReynolds, Ed Cooper, and others to be named as the program firms up, as well as Joe Neri and his special Bob Dylan show electric band, the Mystery Tramps, consisting of Gregg Gould on guitar and harmonica, Hutch Hutchinson on bass and Matt Fabritz on drums. The “Bob Bash” always sells out, so check back for updates and more details, including ticket information, as we get closer to the show.

Mark your calendars for these special events and stay tuned for more events at Old Town Center for the Arts coming this spring.

Tickets are available online at www.showtix4u.com or in Cottonwood at Desert Dancer, and Mt. Hope Foods. In Sedona, you can find tickets at The Literate Lizard Bookstore. For ticket prices and more information about these and other upcoming events, visit www.oldtowncenter.org, or call Elena Bullard at 928-634-0940.